THE MOHAWK INSTITUTE IN THE TUNNELS OF VIMY RIDGE, 1917 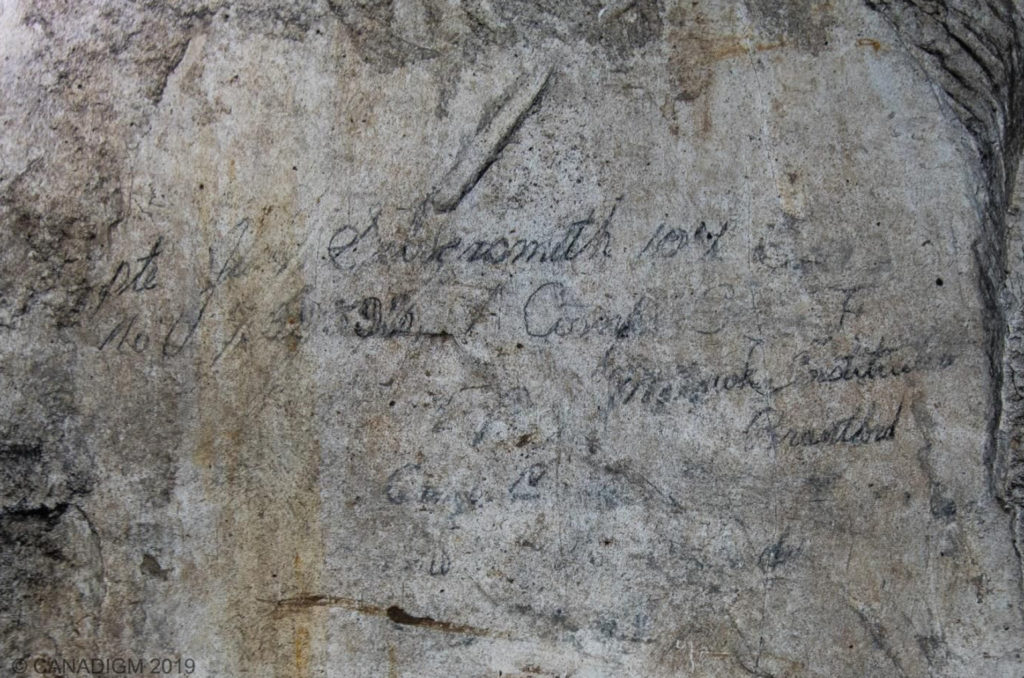 Canadigm, a volunteer-driven organization undertaking projects that bring Canadian history to life, reached out to the Woodland Cultural Centre recently with a discovery they had made in the World War One tunnels under Vimy Ridge.  The Battle of Vimy Ridge was a defining moment in the War efforts of the Canadian forces. Approximately 100000 Canadian soldiers, the first time all four Canadian Expeditionary Divisions fought in the same battle, faced the Kaiser’s German Army over four days in April 1917.

Underground warfare is a little known aspect of the battles of WWI.  The French, and then the British [as well as the Germans] created vast, interconnected tunnels in attempts to move troops in a protected manner, and break through enemy lines with a maximum of surprise.  The Souterraine under Vimy is one such example of these tunnels.

Soldiers in the tunnels relieved their boredom and nerves with carving into the chalk walls of the Vimy tunnels.  From simple names to elaborately carved motifs, the allied soldiers of WWI left their marks on the tunnels of Vimy.  Canadigm is currently scanning and recreating 3-D images of these carvings.

Two men from Six Nations number among the many WWI soldiers that marked the chalk tunnel walls.  Canadigm has sent scans of the carvings made by Six Nations soldiers Jacob Williams and Jacob Silversmith.

In the 1911 Canadian census, Jacob Silversmith is listed as a pupil of the Mohawk Institute born in 1897. School records agree with this birthdate and provide further insight into Jake’s background.  Jacob Silversmith was from the Onondaga Nation. For the first four years of his life he was raised in the Longhouse tradition but with the death of both of his parents in 1901, his guardian introduced him into the Anglican faith.  In the enrollment record, Jake is listed as “now Christian.” When he enlisted in the 114th Battalion he cited his religion as “Church of England.”  Silversmith’s guardian gave the reason for his admission to the Mohawk Institute as “[He] cannot learn in school [and] hopes to be taught to work on [a] farm.”

Jacob’s story continues to be of interest as upon the September 1914 declaration of war against Germany, Jake attempted to enlist in the Canadian Army at the age of 16-17.  Knowing he was too young to enlist, Jake lied and gave his birthdate as “April 10, 1893.” He made it to the east coast of Canada before his true age was discovered and he was discharged as being underage.

Remembering this failed attempt, Jacob re-enlisted in 1916 when the 114th Battalion was forming.  Although he was of age by this date, Silversmith decided to take no chances with being denied the opportunity to serve.  Having previously failed to get overseas under the name “Jacob Silversmith” and the birthdate “April 10, 1893”, Jacob enlisted in 1916 as “Jake Silversmith” [although he signed Jacob Silversmith] with a birthdate of “June 1, 1892.”  He successfully made it to England with the 114th Battalion.

When the 114th Battalion was dismantled and its personnel assigned to other Canadian battalions, Jacob eventually found his place in the 107th Winnipeg Battalion – the final destination of many of the men of the 114th and another famed “Indian” Battalion.  With the 107th, Jake was placed in the tunnels of Vimy to carve and fight his way into history.

Jacob survived the war and was deactivated in April 1919.  He was formerly discharged in Hamilton, Ontario; stating for the record that he was going home to his address in Caledonia (The southeast portion of the Six Nations of the Grand River reserve has a Caledonia rural route address.).  This is the last time Jake/Jacob Silversmith appears in the historic record.Anyone with additional information on either Jacob Silversmith is encouraged to contact the Woodland Cultural Centre with the rest of Jake’s story.  Additionally, the Centre is also interested in learning of Jacob Williams’ life story. Both of these WWI veterans have a memorial 114th Flag waiting for one their descendants to claim at the Centre.