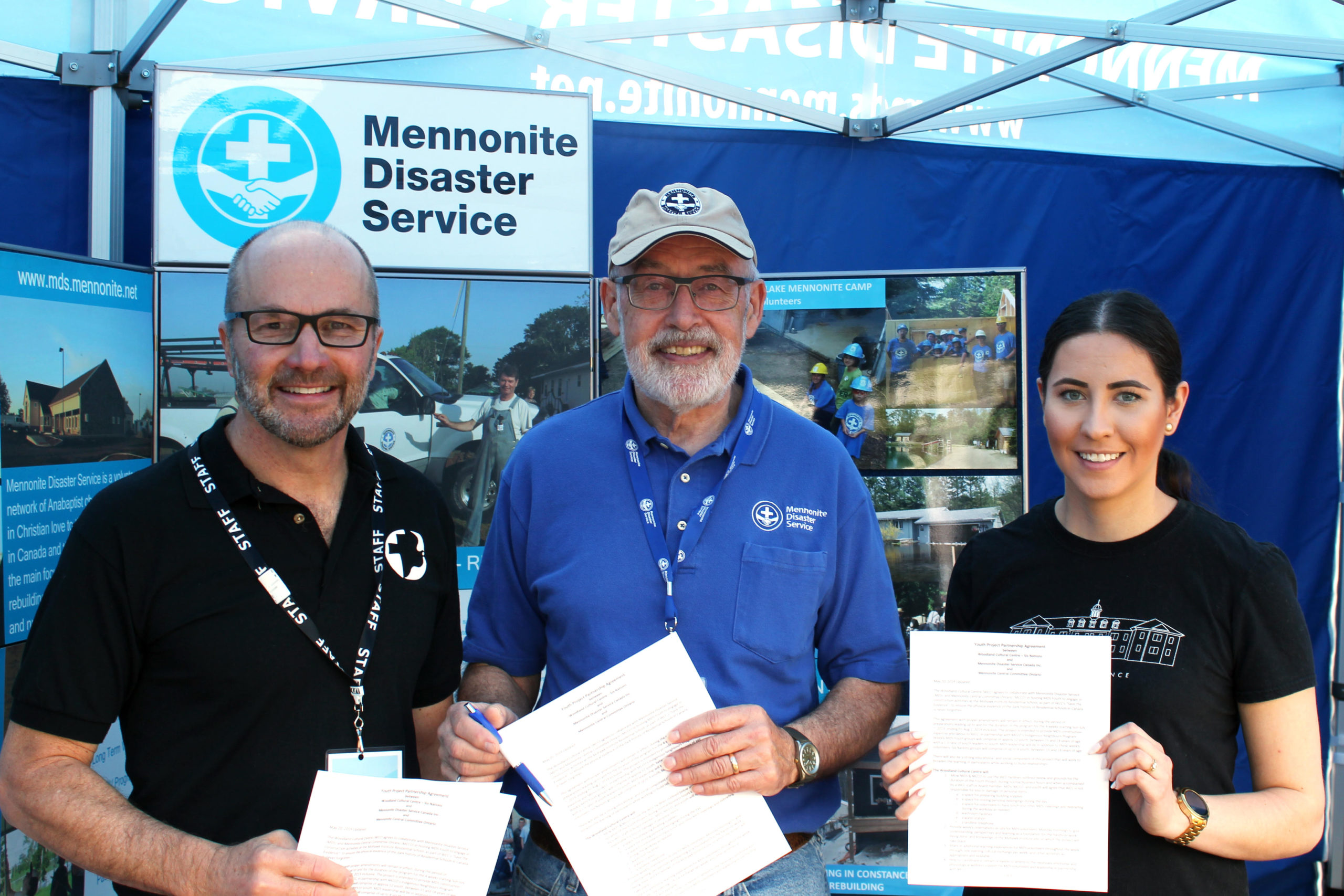 (At the New Hamburg Mennonite Relief Sale, representatives from Mennonite Central Committee Mennonite Disaster Service, and Woodland Cultural Centre started an important step on the road to promoting reconciliation, healing and awareness by signing an agreement to work together on the Save the Evidence Project. Pictured left to right John Head, Executive Director of MCC Ontario, Nick Hamm (MDS ON Unit Chair), Carley Gallant (Save the Evidence Coordinator) from Woodland Cultural Centre). Photo credit: Jesse Bergen

A joint release from MCC, MDS Canada, Woodland Cultural Centre
BRANTFORD, Ont. — How do you repair a disaster 142 years in the making? For Mennonite
Disaster Service (MDS) Canada and Mennonite Central Committee (MCC), it will happen one
desk, one table, and one bench at a time.

This summer, the two organizations will be working together with the Woodland Cultural
Centre to help in the restoration of the former Mohawk Residential School in Brantford, Ont.
“It’s not a typical MDS disaster response,” says Nick Hamm, chair of the Ontario unit. “But
Residential Schools were a disaster for Canada’s Indigenous people.”
Through the project, “we can play a small role in promoting reconciliation and healing, and also
promote awareness to volunteers about what happened there . . . the building represents so
many horrors.”

During its time of operation from 1828 to 1970, thousands of Indigenous children were sent to
the school—separated from their families, stripped of their heritage and not allowed to use
their language. Some were physically, sexually, and psychologically abused.
When it closed, the school and lands were returned to the Six Nations of the Grand River, which
opened the Woodland Cultural Centre in 1972. In 2014, after a storm severely damaged the
building, the community was asked whether to tear it down or save it. An overwhelming
majority voted to restore it, launching a fundraising campaign titled “Save the Evidence.”
Through the campaign, grants for major repairs were received from various levels of
government. But assistance was still needed to complete exhibits for the Centre.

In 2016, Woodlands asked MCC if it could help. “We were honoured to receive the request, and
asked MDS to partner with us,” says Lyndsay Mollins Koene, who coordinates MCC’s Ontario
Indigenous Neighbours program. “We’re so glad they’ve come alongside.”
During the four-week project, which starts in July, youth groups from Ontario and B.C. will build
desks for a representative classroom where children studied, and the benches and tables for

the dining room where they ate. They will also help repair and organize the return move of the
Centre’s research library.
MDS is supplying the volunteers; MCC will assist with cultural orientation, along with funding
the cost of the materials.

“The project is steeped in a story we are a part of,” says Mollins Koene, noting Mennonites
founded and ran three residential schools in Northwestern Ontario.
Through the project, MCC and MDS are inviting its constituent churches “to work as part of a
story that talks about a colonial history that is still part of Canada today,” she adds, noting
Woodland Cultural Centre “has extended a hand to us to be members of a three-way
partnership.”

For Carley Gallant-Jenkins, Outreach Coordinator at Woodland, it’s “very important to us to
have MCC and MDS alongside, offering their support and services.”
After almost five years of work, “we are finally seeing the end in sight,” she says, adding the
assistance from MCC and MDS “will help us get back into the building.”
She’s excited about the contribution from the MDS volunteers.
“The furniture will help set the tone for the space, showing what it was like when children were
sent there,” Gallant-Jenkins says. The dining hall restoration will be particularly poignant. “Siblings who were sent to the school
were separated. In the dining hall, they couldn’t talk to each other, but at least they could see
each other from a distance,” she shares. In addition to the work, volunteers will get a chance to assist with an archeological dig taking
place on the grounds of the school. “That will make the experience even richer,” says Gallant-Jenkins. “Imagine what it will be like
to find something that once belonged to a student, a coin, a button or something else.”
Along with the work, volunteers will participate in cultural and historical orientations, and also
meet survivors. “They are hard stories to hear, but so important if we are to move forward together,” she
shares. Adds Mollins Koene: “The project is more than restoring a building. It’s about restoring
relationships between Nations, and between individuals.”