SUPPORT
Published On: March 16, 2020Categories: Events, News, Save the Evidence

Direct from the Friends & Neighbours of Save the Evidence Press Release: A lecture by author Tanya Talaga scheduled for the Sanderson Centre on March 24 has been postponed to the fall.

The decision to postpone was made in response to the recommendation of the Ontario Chief Medical Officer that gatherings of more than 250 be cancelled to limit the spread of Covid-19. 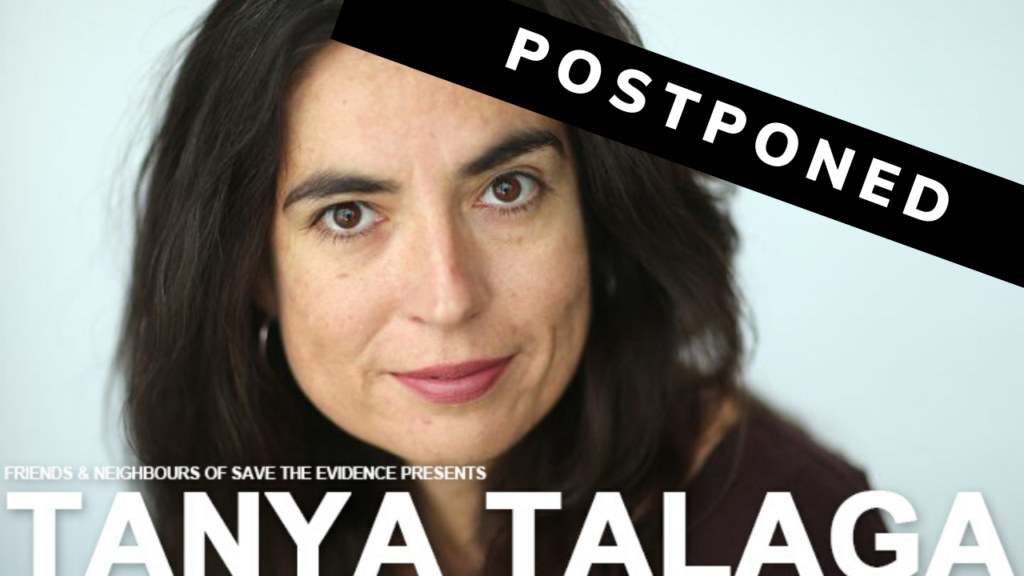 The free lecture, which was going to fill the 1,125-seat theatre, was sponsored by Friends and Neighbours, a grassroots committee of volunteers supporting the Woodland Cultural Centre’s Save The Evidence Campaign. The lecture was organized in partnership with Laurier Brantford and The Sanderson Centre.

“We thought it was the safest thing to do,” said Dave Neumann, chair of Friends and Neighbours. “It’s important that we all do whatever we can to reduce the spread of Covid-19 and keep our community safe.”

“We’re working closely with Ms. Talaga, the Sanderson Centre, Laurier, Woodland and our sponsors and supporters to reschedule the event for the fall,” he said.

Everyone who has booked a ticket for the March 24 event should hang on to it, said Sanderson Centre manager Glenn Brown. They will be honored on the new date.

Ticket holders wanting to return tickets can contact the Sanderson Centre box office by phone at 519-758-8090 or 800-265-0710. Note that during the city’s Covid-19 response, counter service at the box office is suspended.

Although the event is free to attend, tickets are necessary to reserve a seat.

Ms. Talega, who is of Ojibway and Polish descent, was to lecture on “Rights Before Reconciliation.” Her great-grandmother was a residential school survivor.

The award-winning investigative journalist is the author of Seven Fallen Feathers, which focuses on the lives of Indigenous students over a quarter century in Thunder Bay. In the book she delves into the history of the community that has come to represent Canada’s long struggle with human rights violations against Indigenous communities.

The book won the 2018 RBC Taylor Prize for non-fiction and the 2017 Shaughnessy Cohen Prize for Political Writing.

She delivered the CBC Massey Lectures in 2018 which were the basis for her book entitled All Our Relations: Finding the Path Forward.

The Brantford lecture was to be the fifth and final event in the 2019-20 lecture series organized by Friends and Neighbours. Planning is underway for the 2020-21 series.

Save the Evidence is a capital campaign to raise awareness and support for the repair and renovation of the Mohawk Institute building.  Its goal is to ensure the physical evidence of the dark history of residential schools in Canada is never forgotten.

After its closure in 1970, the former Mohawk Institute reopened as the Woodland Cultural Centre, which operates as a museum, gallery, and cultural hub for indigenous history, language, education, art, and contemporary culture. The Save the Evidence campaign has received support from Six Nations Elected Council, the City of Brantford and the Province of Ontario, as well as from individuals and organizations

Click here to learn more about the Save the Evidence Campaign