Woodland Cultural Centre invites the community out to experience the Indigenous Voices of our local musicians and performers at our popular Coffee House & Open Mic night on October 19th, 2019 at 7pm 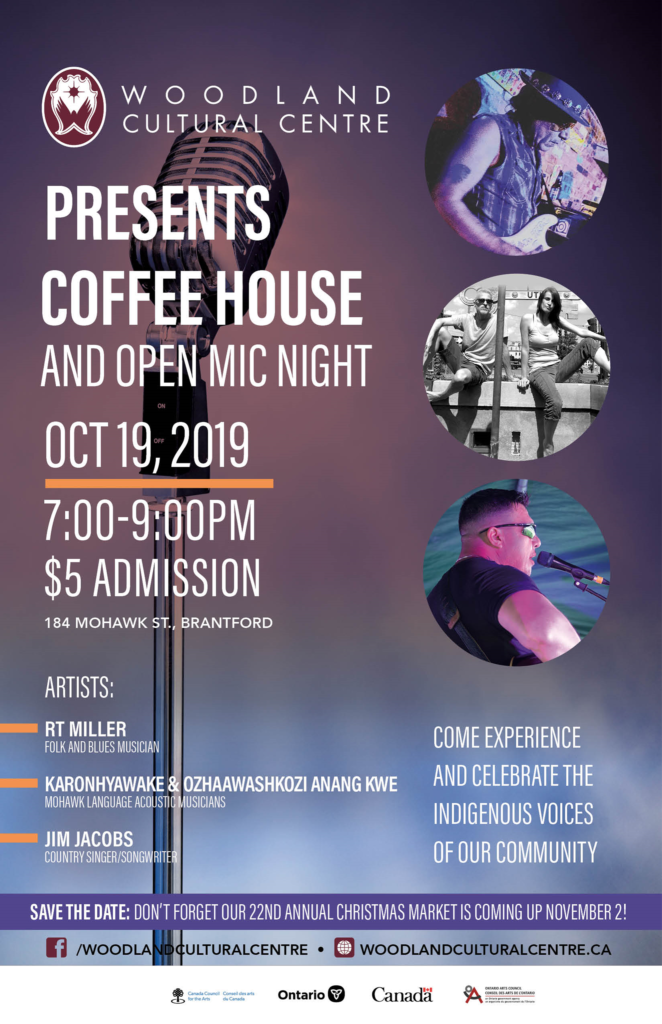 The night will showcase all genres of music and also include spoken word performances, with coffee and refreshments served. Our line up for the event is RT Miller, Karonhyawake Jeff Doreen and Ozhaawashkozi Anang Kwe Laura Kooji, and Jim Jacobs.

RT Miller is a singer, song-writer and musician from Six Nations.  Electric and acoustic guitars, harmonica, mandolin and vocals are his passions.   He started his musical journey at five years old signing in a school talent show and by the age of 15 he was playing in bands covering everything from country to rock-n-roll, blues and southern rock. As a local band member of “The Healers”, Randy also does acoustic unplugged sessions with unique vocals accompanied with a country, folk, bluegrass flavour of music that will capture your attention with deep lyrics and soulful rhythms.

Karonhyawake Jeff Doreen and Ozhaawashkozi Anang Kwe Laura Kooji began playing music together several years ago. They perform a beautiful set of the familiar melodies of the Beatles, translated into the traditional Mohawk Language. Revitalizing Indigenous Language through contemporary music is their passion and an important part of their Musical performance.

Jim Jacobs grew up on a farm at the corner of Smoothtown in Six Nations Ontario. Spent 10 years in Nashville TN playing guitar and writing songs. Currently working on an album in Nashville TN that will soon be finished and released. His biggest musical influences include George, Merle, Johnny, Waylon and Willie, Straight, Johnson and many others of the 70’s outlaw country era.

There will also be an Open Mic segment to feature more local artists on a first come first serve basis.

The event will begin at 7pm and tickets at the door are only $5.

We do invite all Media and Press to join us at this event Free of Charge and simply require you to pre-register with our Marketing Coordinator Layla Black marketing@woodlandculturalcentre.ca